August 24, 2020August 24, 2020 | Dr.ShakyaDr.Shakya | 0 Comment | 11:48 am
Our sages have developed a system including mantras and exercises in which Suryopasana is coordinated. This is called ‘Suryanamaskar’. It consists of a total of 10 rugs. The origin, condition and growth of our physical strength is based on the Sun.

People who sunbathe, sunbathe always remain healthy. Suryanamaskar has an effective effect on the body’s circulatory system, breathing system and digestive system. It helps in removing the causes of many diseases. Regular practice of Suryanamaskar intensifies thought and memory along with physical and mental energy.

Yoga Guru Doctor Shakya said: The Sun has as much curative power as it is not in anything else in the world. In the morning, after getting removed from the toilet, take a blanket or tat (kantan) posture and stand in front of it. As per the picture, meditate on Lord Adinarayan by adding hands in the perfect position, closing your eyes, filling your heart with devotion.

Hey Addev Suryanarayana! I greet you O God who gives light! You are happy with me Hey Divakar Dev! I greet you Hey Tejomay Dev! You are my greeting
Surya Namaskar Mantra Lyrics 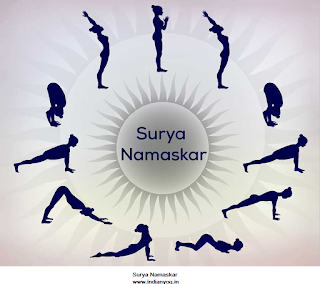 Second position:
In the position of salutation, both arms are above the head, arms straight, elbows are tilted, the body above the head and waist is tilted backwards, eyesight is in the radius, legs straight, knees are in the other position, in this position, inhale. fill.

Fourth position:
Right leg back, near the left foot, both arms straight, ankles ground, both knees and elbows stretched, waist raised, head drawn to knees, chin to chest, scars and wrists in triangles. , Towards the knees, release the breath while raising the waist.

Fifth position:
Sastang Namaskar, Frontal, Chest, Both Palms, Both Knees, Claws of both feet, these eight limbs are held on the ground, waist raised, elbows drawn towards each other, in the fourth position, exhale.

Seventh Position:
Sastang Namaskar, Frontal, Chest, Both Palms, Both Knees, Claws of both feet, these eight limbs are held on the ground, waist raised, elbows drawn towards each other, in the fourth position, exhale.

Eighth position:
Bringing the left foot forward, the paw of the foot in the former position between the two palms, the paw and knee of the right foot rests on the ground, eyes upward, inhale while coming in this position. (Change the foot going back and forth in the third and eighth position in each Suryanamaskar.)

Ninth position:
This position is a repetition of the second, bring the right foot forward and place it near the left, with both palms resting on the ground near both feet, frontal knees, chin sternum, both arms straight, both knees and The elbows are stretched, exhaling in this position.

Tenth position:
According to the initial proven position, the entire body is taut, the ankles and thumbs of both feet are interconnected, the vision is nasal, both palms are in a posture of salutations, the thumbs are in the chest, the breath is filled in, thus in ten positions a sun salutation would be complete is. (This tenth position is the perfect position for the upcoming Suryanamaskar.)

What is Moolbandh in yoga?If we try to understand its action carefully, then it is easily understood and also in practice. Moolabandha has two grounds. Giving a heel pressure to

Mayurasana (Peacock Pose): In this asana, the shape of a peacock or peacock is made, it is called a peacock. Meditation in the Manipur Chakra. Breath External Kumbhak. Technique of Mayurasana

What is Anulom Vilom Pranayama: Anulom Vilom means one of the main types of vascular resection pranayama. It is very important and beneficial pranayama. Like other pranayama, it is also